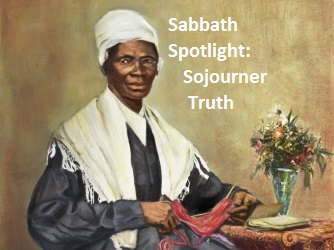 A Sabbath keeper and an Amazing Woman

No one is sure when she was born since she was born into slavery to Betsy and James Baumfree (meaning “tree” in low Dutch as he was very tall). Slaves, by law, could not be taught to read or write so no record was made of her birth. Her parents had “10 or 12 children” but each was sold in childhood. One sister was only three years old when she was sold as a slave together with her five year old brother. Isabella, Sojourner Truth’s birth name, was nine years old when she was taken from the Ulster County, New York, location of her parents and auctioned off together with sheep. She spoke Dutch and her owners spoke English, so she was frequently severely beaten because she couldn’t understand their orders. Isabella was sold four times. As a young woman, a slave named Robert from another farm loved her and sometimes visited her. Finally, he was pursued by his master and horribly beaten as Isabella watched. His crime was selecting a woman outside his master’s farm.

Instead she was given Thomas as her husband. Thomas was older and had already had two wives in the past, but each in turn was sold and sent away from him, and after each time his master selected another woman for him. Isabella was the third wife his master chose for him. Together they had five children. By 1827, Isabella was determined to escape. Her master had promised her she would be set free a year before the day the state of New York had set by law as the freedom date for her and 10,000 other New York slaves. Yet when the promised early release day came she was not freed. So she first spun 100 pounds of wool into yarn so she would not leave her work undone. Then after much prayer, just before sunrise she took a handkerchief full of her belongings and her infant youngest child, and quietly set out to escape on foot. She really didn’t know where she was going. She trusted God to guide her, and He did. Thomas stayed behind to care for the remaining children. Isabella was taken in by a couple who hated slavery, and when her owner arrived to take possession of her, the couple paid him twenty dollars so he would not take her or her baby back with him. But, Isabella’s life was still not smooth and easy for there were no easy paths set before freed slaves. She worked as a servant to the couple and rejoiced that God had led her into freedom!

Precious freedom! Do we value it? Do we guard and protect it? Do we stand up for freedom as Sojourner Truth did? Do we do everything in our power to protect our Constitution which was inspired by God? We must not take our freedom for granted. Sojourner Truth didn’t just leave everything to God—she did her part bravely and boldly relying upon God’s help.

Next in Part 2: Her only son, Peter, was sold into slavery before she escaped. Only six years old, Peter was sold again to a plantation owner in Alabama.  It was illegal to sell a slave out of New York to any southern state. What did she do? How did God help her?

Dianne McDonnell is the founder of Freedom Ministry.